Wall Street Was Once a Slave Market

Shared for educational purposes, with thanks to: https://www.dailykos.com/stories/2011/12/27/1049058/-
Wall Street Was Once a Slave Market
By Horace Boothroyd III
The first slave market in the state of New York was on Wall Street. Yes the place that now holds the majority of Americans in debt slavery has been in the business for quite some time. 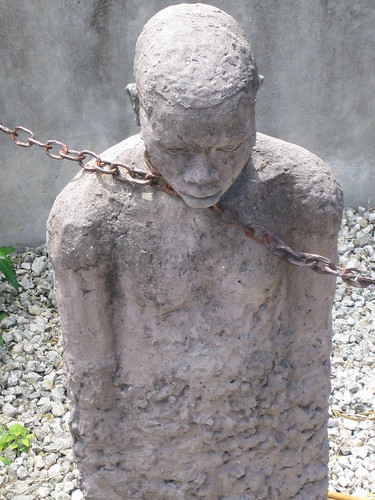 1711. Law Appointing a Place for the More Convenient Hiring of Slaves(PDF)
Source: Minutes of the Common Council of the City of New York, vol. II, 458, December 13 , 1711. Be it Ordained by the Mayor Recorder Aldermen and Assistants of the City of New York Convened in Common Council and it is hereby Ordained by the Authority of the same That all Negro and Indian slaves that are lett out to hire within this City do take up their Standing in Order to be hired at the Markett house at the Wall Street Slip untill Such time as they are hired, whereby all Persons may Know where to hire slaves as their Occasions Shall require and also Masters discover when their Slaves are so hired and all the Inhabitants of this City are to take Notice hereof Accordingly.

Apparently the fact that slaves were being rented out by individual owners was seen as a danger to the populace of New York City. Having non-whites loose on the streets was seen as a threat to the status quo. So a slave market was born.

As the number of slaves imported into the city soared, barrel makers, butchers, carpenters, blacksmiths, and tin workers began to purchase young enslaved men in order to teach them their trades. Typically, when a slave owner ran out of work, they hired their slaves out at half the rate of free labor.

Often the slaves themselves were sent out to find work. In a time when fear of a slave uprising was ever-present, the sight of so many enslaved men walking the streets looking to be hired caused alarm. Fearful white citizens began to complain. They demanded a market where slaves could be hired, bought, and sold. Finally, on December 13, 1711, the City Council passed a law “that all Negro and Indian slaves that are let out to hire…be hired at the Market house at the Wall Street Slip…” This market, known as the Meal Market (because grains were sold there), was located at the foot of Wall Street on the East River. It was the city’s first slave market.

So trading on the lives and well being of humans is nothing new to Wall Street. Be it buying and selling humans as a way to gain profit. To buying and selling the labor and fruits of their labor of the 99% is seen as acceptable. All in the name of profit.

.Who says there are no African-Americans on Wall Street? You can check in on the former home of the Royal African Trading Company, NYC's once bustling slave market, at the corner of Wall and Walter Streets. In the late 1700's, NYC was second only to Charleston, SC for the busiest slave market and could boast that more than 20% of it's population were slaves. We've progressed a lot since then - today, only about 10% of welfare recipients have been used as slaves in demeaning Workfare programs. Afterward, you can stroll down to the touristy South Street Seaport and have an overpriced dinner at the port where many of NYC's slaves arrived.

One block east of Broadway between Duane and Elk (take the 2 or 3 train to Wall St.) you'll find the African Burial Ground. The bodies of an estimated 20,000 African slaves were buried here until the 1790's. The lot began to be used as a cemetary for Africans when Trinity Church, which had been the cemetary for many of the city's poor, issued a decree forbidding Africans from being buried in their churchyard. Other NYC laws during this time restricted the number of persons who could attend African funerals, and at what times they could be held. The small plot of land left untouched as a historic memorial is but a tiny fraction of the graveyard's size. Many of the buildings currently surrounding the memorial either destroyed or were built on top of the remains of African slaves.

The fact that this travesty to humanity was begun on Wall Street speaks volumes about what is acceptable to those praying to the altar of greed. Anything goes and values like dignity and humanity are to be excluded.

Wall Street influence, and the battle between main Street and Wall Street stretches way back in United States history. Mary E. Lease was a well-known “stump” speaker for the Farmers’ Alliance and the Populist Party. They called her and her colleagues stump speakers because they stood on tree stumps to be seen over the crowd. Between 1890 and 1896 she toured the country making speeches telling farmers to “raise less corn and more hell.” Some scholars believe Mary E. Lease was the model for the character Dorothy in Frank Baum’s The Wonderful Wizard of Oz. In one of her best-known speeches she told her audience:

But the sordid history of Wall Street is actually much older and darker. December 13, 2011 was the three hundredth anniversary of the law passed by the New York City Common Council that made Wall Street the city’s official slave market for the sale and rental of enslaved Africans.

1711 Law Appointing a Place for the More Convenient Hiring of Slaves
Source: Minutes of the Common Council of the City of New York, vol. II, 458, December 13, 1711

Be it Ordained by the Mayor Recorder Aldermen and Assistants of the City of New York Convened in Common Council and it is hereby Ordained by the Authority of the same That all Negro and Indian slaves that are lett out to hire within this City do take up their Standing in Order to be hired at the Markett house at the Wall Street Slip untill Such time as they are hired, whereby all Persons may Know where to hire slaves as their Occasions Shall require and also Masters discover when their Slaves are so hired and all the Inhabitants of this City are to take Notice hereof Accordingly.

The predecessor bank of Citibank, which has offices at 111 Wall Street, was actually founded by a banker and sugar trader deeply involved in financing the illegal slave trade bringing Africans into Cuba in the 19th century. When Moses Taylor died in 1882, he was one of the wealthiest men of that century with an estate reportedly worth $70 million, or about $1.6 billion in today’s dollars.

There is now an online petition addressed to Mayor Bloomberg and the City Council calling for a historical marker at the site of the Wall Street slave market detailing its role in the history of New York City. I signed the petition and welcome others to join the campaign. The letter reads:

December 13th is the 300th anniversary of the law establishing the first slave market in New York. That market was located at the end of Wall Street where present day Water Street is. Yet there is not a single sign, plaque, marker, statue, memorial or monument with any reference to slavery or the slave trade in Lower Manhattan (with the exception of the African Burial Ground memorial).

The fact is that New York’s first City Hall was built with slave labor. The first Congress passed the Bill of Rights there and George Washington gave his inaugural speech there. Slaves helped build the wall that Wall Street is named for. Slavery was such a big part of early New York that during the colonial era one in five people living in New York was an enslaved African. One in five. Yet there are no permanent signs acknowledging the role slaves played in early New York.

Even after the discovery of a massive, 6.6 acre burial ground where Africans — free and enslaved — were buried, with thousands of individuals possibly still in the ground, their contribution to New York is and has been completely invisible. After 300 years it is finally time to tell their story.